We probably can't be sure exactly when Nickel Feuerstein was born, but the list below is a general clue.  It was transcribed from the Captain's List of adult male passengers on the Ship Peggy, when it arrived in Philadelphia in September of 1753 with a hold full of immigrants.  The two names at the bottom of the second column are Nicholas Firestone and Nicholas (ditto) Junior. 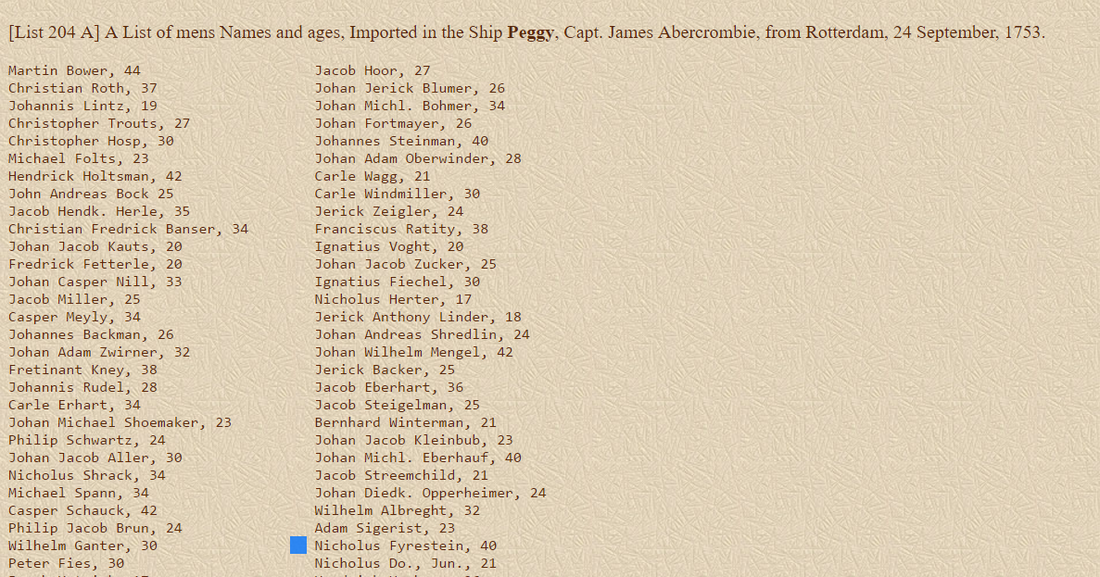 - Link to the Original Ship's List (Page 557 for Nicholas and Son) -
​The passenger list above is not completely authoritative. When were the ages recorded, in September of 1753 or before the Peggy sailed, maybe two months earlier or as much as six, seven, or even eight months earlier? And how accurate is it? Nicholas Junior is listed as 21, but he was actually only 18. The captain of an immigrant ship frequently owned the indenture contracts of his passengers, and they were more valuable if he overstated a young man's age and understated a middle-aged man's age. Nicholas Senior does not appear in the birth/baptismal records of the Berg Church, which begin on December 25, 1712. Given that, if he was exactly 40 upon arrival in Philadelphia, he was born between September 25 and December 24 of 1712, but the odds are pretty good that he was a little older.
​
Another useful source is the 1742 census (transcription below) where Nickel is listed as being a 32-year-old farmer of moderate means.  Unfortunately, the census for Berg and Thal has a few errors, so it's also not entirely authoritative, but taken together with the Captain's List, Nickel's birth was about 1710-1712.

​Nicholas was a carpenter-in-training (ein zimmergesell​) in January of 1733 (source: baptismal record shown below), additional evidence that 1712 is a reasonable birth year for him (and 1706 is not).  March 25, 1712 is sometimes given as his birthday and this may be correct, but the source and reliability of this date do not appear to be widely known.  Possibly it's in a family Bible passed down through the generations.  If that date is correct, then Nicholas was 41 when he arrived in Philadelphia.

In a small parish like Berg and Thal, most people knew each other. The Feuersteins and Nonnenmachers witnessed baptisms together throughout the years of the Berg Church records and earlier, according to the records of nearby churches.  The first documented evidence of Nickel and Catharina together is in 1728 when they witnessed a baptism at the age of about 16 or 17.

The following table is from two baptisms that both Nickel and Catharina witnessed before their marriage.  In hindsight, the witnesses at the first are nearly a family group.  In addition to Nickel and Catharina, is Matthis Gartner, the miller at the Froshmuhl.  A son of Matthis later married a niece of Nickel's and took over the operation of the mill from his father.  ​The second baptism shows that Nickel is "ein zimmergesell", a carpenter-in-training.

​​​​NICKEL AND CATHARINA TOGETHER AS
WITNESSES AT BAPTISMS

NICKEL AND CATHARINA TOGETHER AS WITNESSES AT BAPTISMS
The marriage record of Nickel and Catharina is on the "Johannes Feuerstein" page, along with his other children.
​​
The births of Johann Niclaus' and Anna Catharina's children are listed below. The names of the parents and children are just as they appear in the baptismal register.  All the information in the table is taken from the baptismal records of the Berg Church, except Michael's.  His birth year is calculated from a court petition for a guardian after his father's dealth.  For more about Michael, see the Shirer website listed on the "GUESTBOOK & LINKS" page.

Johann Joseph and Johann Theobald were presumably named after Catharina's younger brothers.  Rosina was a very common name for Feuerstein daughters in Berg and Thal, so it was likely the name of someone who meant a lot to them.  The names of the other children were very common in the parish and so may have been inspired by friends or other family members.

​This view of the Kirchberg is from a tourism website.


The bottom of the purported Feuerstein family crest on the previous page says "Austria." The actual name of the country is Österreich, so an authentic Feuerstein crest would be very unlikely to have Austria on it. It's also very unlikely for a crest to have a family name on it. However, the BIG FRAUD is that only a small percentage of families, the nobility, have crests (coats of arms). Like most families, the Feuersteins do not have a crest.